Join Dynamics Scientific as we discuss our turnkey solution COMPACS, which monitors the health of equipment in real-time. Dynamics Scientific has spent close to three decades developing the system and technology. Learn what differentiates this solution from all others on the market. Hint: It employs a patented artificial intelligence that may enable you to diagnose equipment defects several minutes, hours or even days prior to equipment failures.

Case studies will show how COMPACS helps facilities tap into early detection and identification of issues. Knowing the real-time health of all the equipment in your facility empowers you to schedule maintenance and repairs in the most cost-effective manner possible. 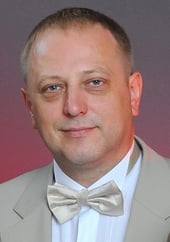 Andrey Kostyukov was born in Omsk in 1970.  In 1996 he graduated from Omsk State University majoring in “Economics and Production Management”. Since 1991 Andrey V. Kostyukov has held the positions of accountant, chief accountant, and CFO at NPC DYNAMICA. In 2001 he was appointed as First Deputy of Director General and became responsible for sales and marketing. In 2007 he earned his Ph.D. in Economics after presenting a dissertation on the subject of “Organizational and Economic Mechanism of Equipment Operation Under Real-Time Health Monitoring (In the Case of Oil-Refining)”.

In July of 2015, Andrey was appointed as Director General (CEO) and joined the Board of directors of NPC DYNAMICA. In July of 2016, with the approval of the Board of Directors, he established the subsidiary DYNAMICS Scientific Production Center USA, Inc. The new subsidiary is headquartered in Houston, TX, where he serves as President.

Andrey V. Kostyukov participates at well-known international conferences as a speaker. His articles have been published in leading magazines such as "Oil & Gas Journal Russia“ and “Eurasia Processing”.

Register now for this webinar and others

If you would like to register for any of the following upcoming webinars, please check the box next to the webinar.

Looking for other on-demand webinars from 2020? Click here now to see more on-demand!